Big Brains for Rent has been at the forefront of new distribution technologies: from the streaming Internet radio shows DV Guys and Digital Production BuZZ, to developing the klickTab technology for Open TV Network that commercializes standard RSS feeds.

The Digital Production BuZZ replaced DV Guys in 2005 and was (consistently in the Top 100 Tech podcasts in the iTunes sign-ups). During this period the company produced several other podcasts.

Big Brains for Rent is comfortable with most web technologies beyond their expertise in Audio and Video encoding, including WordPress, PhP and Ruby on Rails. 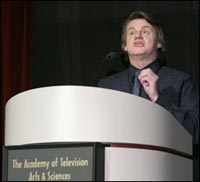 Big Brains For Rent’s Philip Hodgetts is an expert in the field of digital distribution, being invited to present the keynote address at the Academy of Television Arts and Sciences’ NEXT TV day in November 2006. The presentation is available online. He has also presented on how to grow and monetize an audience for independent productions in New York, Boston, Las Vegas and San Francisco.

He also presented the Keynote address on The Democratization of Distribution for the Podcast Summit at the NAB 2007′s Post|Production Conference in April.

Two of the principles in Intelligent Assistance are also involved as founders of the startup klickTab, the only technology to allow for commerce in an RSS feed. klickTab has a patent applied for around the technology. Big Brains For Rent are developing the entire web application for content publishing, metadata management, client sign up and custom (commercial) RSS feed building.